A bane about studying in international universities is the requirement for a slew of examinations like the TOEFL, IELTS, GRE, GMAT, and the like. This often makes it a cumbersome task for students who tend to appear for these tests repeatedly to earn better scores and gain admission into top universities. To make it easier for students to gain admission easily, several universities in Canada have started waiving off the requirement of scores of some of these examinations. One popular waiver is that of the IELTS/TOEFL (or other language tests).

All about IELTS - Exam - Complete Information 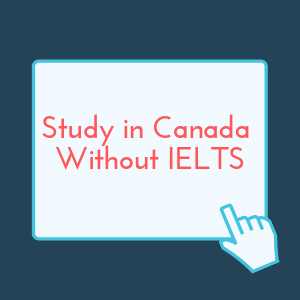 Why is IELTS no longer mandatory?

Canadian universities have found that students who have completed their degrees from a recognized educational institution and have received their instructions in English often show a good degree of English knowledge - be it reading, writing, or speaking skills. Hence, they felt it made sense to do away with the requirement of an English language proficiency test like the IELTS that has a minimum score requirement of 6.0, to make it easy for students to apply for higher education in Canada. However, the majority of Canadian universities have kept the acceptable IELTS score at 7.0, with no less that 6.5 in every component.

Students who apply to universities in Canada that do not demand the submission of IELTS scores, however, need to submit certain documents to support their claim of English language proficiency. These may include requisite certificates, documents stating that the medium of instruction in the first or last obtained degree was English, transcripts, and the like.

Top universities that do not require IELTS score

Some of the general rules governing the non-requirement of IELTS scores are that students are either native English speakers; or, students hailing from non-English countries have received formal degree education of three or more consecutive years in English. Besides, students who have completed either an O-Level or A-level examination also earn an IELTS exemption.
Individual universities have their set of exemptions and requirements to prove applicant's English language proficiency. The following is a list of universities in Canada that offer this exemption: Some Universities will allow conditional admission (like you might have to do extra language courses while studying).

Will there be visa issues if IELTS or TOEFL scores are not provided?

Canada has introduced new student visa regulations that not only help ensure that international students genuinely study in the country's universities, but also give them certain levels of freedom to work. For instance, while earlier prospective students only needed to show an intent to study in Canada, now they need to prove their enrollment in a college that accepts international students to be eligible for a visa. Hence, students applying for visas without providing IELTS scores need to ensure their enrollment in the university of their choice that does not require the IELTS papers. While the college of their choice does provide them with a letter of admission, students may provide supporting documents to prove their English language proficiency when applying for a student visa. What's more, students can now no longer stay on a study permit beyond 90 days of completing their course. This is to ensure that students do not switch to short-term programs after enrolling in a long-term degree course.

Such moves with stringent regulations are set to help Canadian authorities curb the inflow of study permit holders unwilling to pursue studies, and instead ensure that genuine students are issued student visas. This move is expected to help Canada weed out educational institutions of poor quality and offer high-standard education to international students seeking quality degrees.

What are the alternatives to an IELTS score?

As mentioned above, there are universities that do not require an IELTS score as an essential for admission, and that the Canadian government has made stringent rules for the inflow of international students but it does not revolve around an IELTS score per se. However, students wanting to study in Canada still have to present a certificate that proves their English language standard. However, the Canadian government does not accept any and all English language certificates.

Below is a descriptive list of choices that can be substituted for an IELTS score.

Places to Study in Canada