LSAT is a half-day test administered nine times each year throughout the world. Its score is widely used and is an important part of the admission process to law schools in the USA, Canada, Australia and many other countries. It is designed to assess reading comprehension and logical and verbal reasoning. 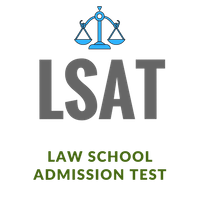 Candidates who are appearing for the LSAT must have completed their Bachelor’s Degree in Law or must be in the final year of their Bachelor's degree. Starting in September 2019, students may take the LSAT up to three times in a single LSAC year (June 1-May 31). Most law schools consider only the highest score presented to them. The LSAT exam score is valid for five years after taking the test. LSAC allows a candidate to take the test up to five times within the current and five past testing years. In a lifetime, the test can be taken up to seven times.

The LSAT is administered digitally at all test centers. Writing samples test can be taken online at home. The content remains the same as the paper-pencil test but it is important to be familiar with the test software. Reading digital articles on devices like computer screens, phones or tablets might help. You may want to take the practice tests provided by LSAC in order to prepare for the Digital LSAT.

Two out of the four sections of LSAT assess logical reasoning. Mostly the ability to analyze and evaluate arguments. Both these sections have 25-26 questions and a time limit of 35 mins each. The analytical reasoning section consists of 27-28 questions and lasts 35 mins. It is sometimes also called the 'Logic Games' section. The reading comprehension section has short passages and questions based on them. They aim to test the candidate's ability to comprehend and infer. It is a 35 min section with 25-26 questions. There is also an unscored 23-28 question section called the experimental section. This section is used to test new questions that may appear in future tests. LSAT requires all candidates to write an essay presenting an argument favoring one side and rejecting the other. This is not a graded section, but the essay is passed on to law schools for consideration in the candidate's application process.

The LSAC recommends devoting enough time for preparation, as test scores are seen to be directly proportional to prep time. You do want to give your best for the test, as the LSAT score, along with the undergraduate GPA, is the most important deciding factor in your application. In general, most students spend around three to four months of time preparing for the test. LSAC has released prep material and practice tests to maintain a standard for LSAT prep. The pattern of the test is quite a consistent year after year and hence candidates can refer to previous tests for a general idea of the challenge. Attempting practice tests also helps to estimate how much time to spend on which section. Some prep companies have obtained licensed LSAC test questions. However, these are independent agencies and are not monitored by LSAC.

LSAT requires you to register approximately one month before the actual test date. One can expect LSAT scores in about three weeks of taking the test. LSAT is conducted nine times a year. Winter LSAT tests occur in the months of Jan and Feb. You can take the LSAT in March or April every spring. Summer dates in June and July are more popular amongst students as they fall over the summer break. Finally, you may choose to take the test in the fall administration of Sept, Oct, Nov. It is best that you check with the university if they will accept the Nov score for their current year intake. You may want to choose an exam date that allows enough time for sending applications to desired universities once the results are declared. It is also advisable to allow time to take a retest if required.

The basic cost for taking the LSAT in 2020-2021 is USD 200 which includes one free score report. LSAT charges another USD 195 for Credential Assembly Service (CAS), the service provided by LSAT that assembles undergrad work, test results and writing samples to create a report that can be sent to law schools. To apply to one law school LSAT provides a one report package costing USD 430. If you are applying to more than one law school then you will need additional score reports charged USD 45 for each report. Apart from these, you may have to spend some more if you happen to reschedule the test, appear for the test at a non-published test center etc.