When searching for the perfect college or university, prospective students may choose to look outside of their comfort zone and explore other countries around the world. Though the more common locations are scattered throughout Europe and the United States, a viable choice for international students who wish to get an excellent education and exceptional quality of life in New Zealand. 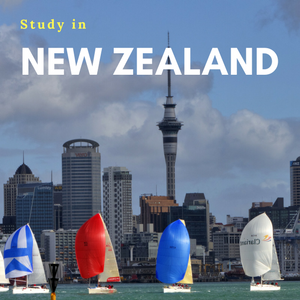 Located in the South Pacific to the southeast of Australia, New Zealand is composed of two main islands, with several hundred smaller surrounding islands. The two largest islands are known as the North Island and the South Island. Before choosing to study, students should be aware of the foreign climate and landscape. At the moment, most people around the world may recognize New Zealand's beautiful landscapes and varied vistas from the Lord of the Rings movies in the early 2000s (some believe this caused the push to study abroad in the country for younger generations, similar to how it boosted tourism in the country in the same manner).

The climate of the country is extremely diverse and varied throughout; northern areas are typically mild, and have sub-tropical climates through the year, while the southern end of the country remains cooler overall. Students looking to study in New Zealand should be aware that most of the country has a somewhat "wet climate" from constant changes in the weather. When looking to study internationally, students should always be aware and be prepared both mentally and physically for the climate of the region, making sure that any health conditions do not impede their plans and equipping themselves appropriately to adapt to the same, if necessary. Another major issue that prospective students should be aware of is the change of currency. In the present time, the U.S. dollar is equal to 1.37 of New Zealand currency.

Take a more detailed look at Living in New Zealand

Tuition and Fees for Higher Education in New Zealand

International tuition and scholarship opportunities can vary for each university; each school states their total costs on admissions pages on their websites and, if scholarships are not offered, typically provide links to outside scholarship pages. Depending on each university, housing can be provided, or assistance is provided to find places of residence for the prospective students. Typically, the average cost of living in New Zealand can vary from NZ$12,000 (about US $8,400) to NZ$15,000 (about US $10,500) per year; the cost includes housing, food, and travel. For international students, there is an international studying fee added to the total tuition; this fee changes per each university and should be checked on each site. Students should be prepared to pay anywhere from $10,000 to $40,000 per year for most courses, depending on the university and the requisite number of credits for their respective courses.

Between the two major islands, there is a total of eight state-funded university options, all offering admission to international students for both short-term and full college experiences. Seven of these universities were in the top 100 in the QS World University Rankings, at least in one subject. The courses offered by them will be more academic rather than vocational. Most programs of study are provided in New Zealand, though they may not be available in all universities; larger schools obviously have more options, while smaller universities offer a more focused education in specialties and specific areas of study. To determine if certain desired programs are offered for study, students should check with university websites to guarantee that their program is available.

All eight universities offer online application submissions. However, unlike the general application for schools in the U.S., each university has an individual application that needs to be filled out. Each application requires transcripts from previous educational experiences, resumes, and proof to meet the English language requirement. International students can prove their language requirement through the International English Language Test System (IELTS) or other equivalent English proficiency tests by meeting the required score for each university. A few of the more popular universities are:

Some basic requirements for a student visa are: (Note:If you're studying a short course that's less than three months, you don’t need a student visa: just a visitor visa.)