STUDYING AT A STATE UNIVERSITY

It was the Northwest Ordinance of 1787 that gave birth to the idea of having state-funded education systems. It kick-started with the establishment of Ohio University in 1804 and has today developed into what we know as state universities. 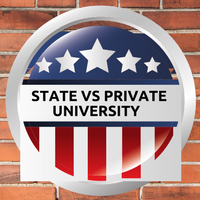 State universities are funded by the governments of the respective states and are public varsities. They are large state schools that offer undergraduate and graduate programs, and often cater to military personnel and government employees. These universities have a single administration but may have several institutions under its ambit - something like that of the universities of California and Texas - or, maybe one large entity spread across acres, nearly resembling a township.

State universities earn subsidies from their federal governments, which differs from state to state. Since they offer low tuition fee, most students rarely need funding. However, these universities offer several scholarships for meritorious students and various financial aids for those in need.